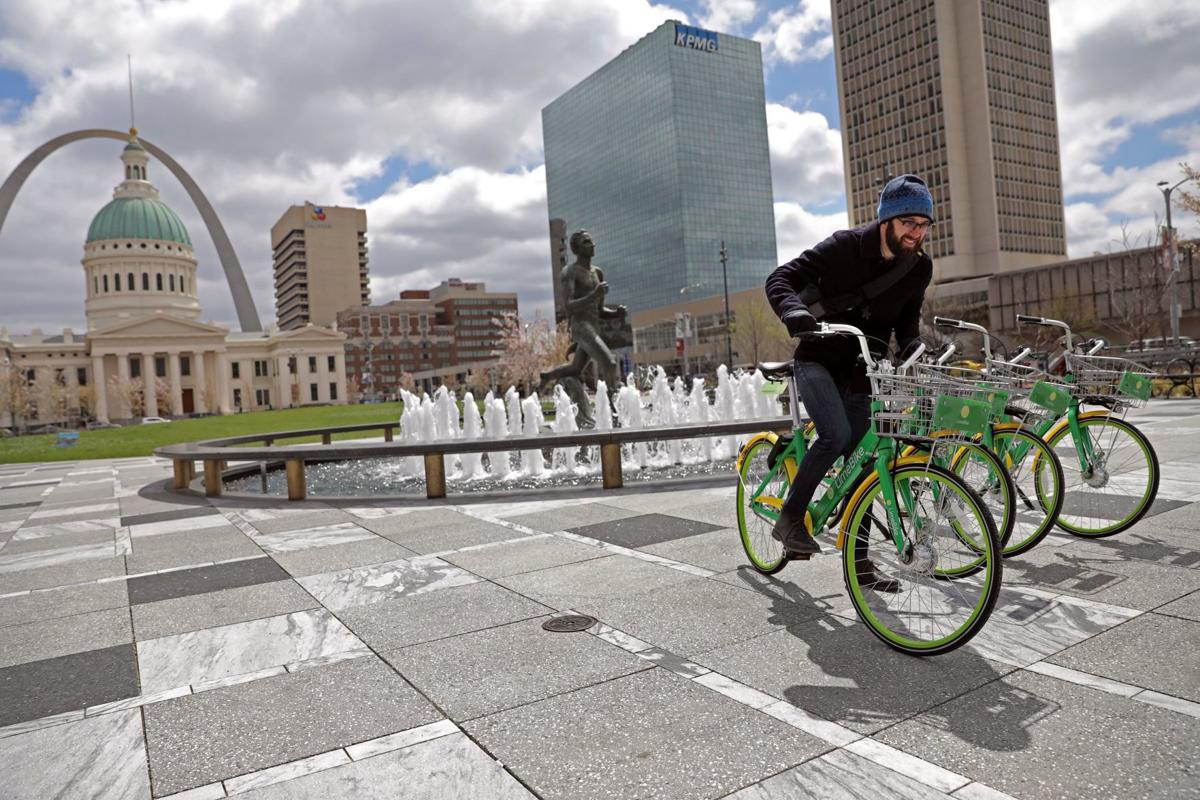 In addition, these regions are a 1 to 2 mile bike ride to MetroLink and the many amenities in the central corridor, jobs, and institutions, making dockless bike sharing a viable way to make basic needs more accessible. Trailnet, financed by the Great Rivers Greenway, is planning to allocate about eight thousand dollars in bike share education courses in these targeted areas to make sure that people who reside in the area know how to properly use the bikes and system.

The St. Louis Dockless Bike Sharing Program makes bike sharing relatively easy. The first step is to download the smartphone app for the bike share company you would like to use and create an account. The next step is to add funds to your account. To access the bike, you simply open the mobile app and scan the bike’s QR code. Once the bike is open, you can ride it to where you want to go and legally park it on a bike rack, or on the sidewalk strip between the street and the sidewalk, then lock it by pushing down the back wheel lock’s red tab. The introduction of the St. Louis Dockless Bike Sharing Program created a convenient way to make short trips to visit areas with congestion or limited parking space, to run errands, to work, or get to transit stations.
The most significant learning curve for bike sharing in each city with a bike share program has been parking, and the same applies to St. Louis. Before bike share users learn how to park properly, it is inevitable that some bikes will end up blocking doorways, driveways, and pedestrian traffic. In such cases, bikes often end up in funny places such as rivers or trees. However, as time passes and as users learn about proper parking, vandalism incidents reduce.

To be a good user of the St. Louis Dockless Bike Sharing Program, you should read the guides created by the bike sharing companies on how to park correctly. You should also pay attention to your bike sharing smartphone app since there are some areas that have parking restrictions. 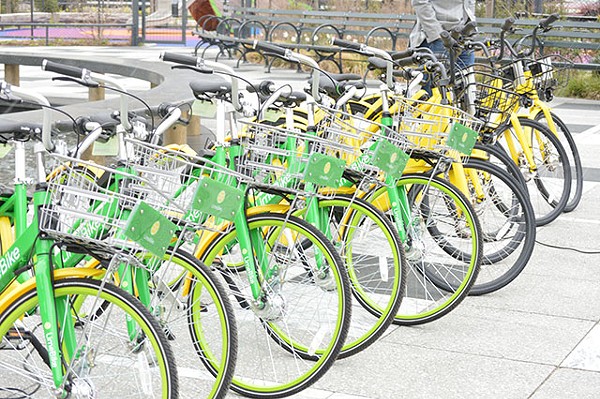 During their initial month of service, Ofo and LimeBike each introduced 750 bikes to the streets, adding approximately 350 more every month. As part of bike share regulation, a cap was set at 2500 bikes. This may sound like very many bikes, but since the bikes are dockless and do not use the traditional stations in Washington D.C. or Chicago, a lot of bikes are required to ensure that bike users are always less than a five minute walk to a bike.

The bike sharing program was created to serve all the residents of St. Louis, visitors, and workers. The companies are obliged to accept cash payment and non-smartphone payment options and are also expected to maintain twenty percent of the bikes available in certain neighborhoods that could greatly gain from the affordable transportation alternative. These neighborhoods are in the Dutchtown South area, and to the north between Natural Bridge and Delmar.

Presently many cities across the United States are introducing this kind of license to introduce dockless bike share to their regions at zero cost and without using taxpayers’ money, while still regulating bike sharing companies to help achieve the cities’ objectives and to maintain order. The gains communities derive from bike sharing include healthier lifestyles, access to local businesses, connections to transit, and an increase in scooter and bike ridership.

The increase in accessibility and convenience is one of the main reasons why bike sharing is rapidly spreading across the United States. Currently, LimeBike operates on many campuses and in more than 30 cities. Ofo has more than ten million bikes in twenty countries and two hundred and fifty countries, including fifteen cities in the United States.

These programs have been instrumental in increasing ridership than their traditional station-based counterparts in the same region. Although the St. Louis Dockless Bike Sharing Program was introduced recently, it has quickly become an integral part of the region’s transportation.

When the St. Louis Dockless Bike Sharing Program was introduced in the region, the emphasis placed on the bike sharing companies were social equity, data sharing, operation standards, maintenance, and safety standards. Social equity was hugely important because, previously, bike share programs were operated by a government entity or non-profit organizations. Without that public ownership, it is essential that private entities are still accountable for making bike share accessible and equitable to all.

As mentioned earlier, the bike sharing companies are required to maintain twenty percent of the bikes available in certain neighborhoods that could greatly benefit from the affordable transportation option, such as those in the Dutchtown South area, and to the north between Natural Bridge and Delmar. Although these neighborhoods are not densely populated, or high priority areas when companies are designating areas to maintain bikes, it is essential that these regions, which have zero cars, many people of color, and low-income households, have access to this affordable option of transportation.… 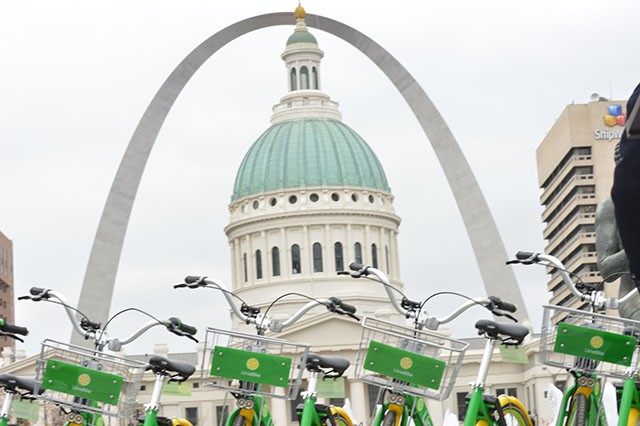 The St. Louis Dockless Bike Sharing Program is a result of several years of effort by various entities to introduce bike sharing into the City of St. Louis. In 2014, Great Rivers Greenway released a bike sharing feasibility research & implementation plan, and in 2017 the St. Louis Bike Sharing Working Group continued that effort following the Bi-State Development. After advancements in the bike Sharing industry led to the introduction of dockless bike-sharing, the Bike Sharing Working Group changed its focus from financing the traditional station-based program to helping St. Louis establish a dockless bike-sharing license system that would give private companies the opportunity to run in the City of St. Louis at zero cost to the city.

Many organizations and people were instrumental in bringing bike sharing to the City of St. Louis. In 2014, the Great Rivers Greenway finished a feasibility research and business plan involving lots of social engagement. The Bi-State Development allowed the Bike Sharing Working Group to refine that plan and identify implementation opportunities. Later, the Bike Sharing Working Group passed over the project to the City of St. Louis, who drafted and passed a license on how to implement and administer the program. However, this is just the tip of the iceberg on how the individuals and groups have made The St. Louis Dockless Bike Sharing Program a success. All these entities believe in the ability to grow the economy and quality of life by solving problems faced by the region’s residents such as transportation.

Dockless bike share does not work using stations like the traditional systems in Washington, D.C., or Chicago. Instead, you look for bikes using a smartphone app GPS locator or by calling a phone number. The bikes lock to themselves by clamping the back wheel and this makes the bikes more accessible throughout the city.

The scooters and bikes can be parked on the sidewalk strip between the street and the walking area. They can also be parked at public bike racks. The dockless bikes usually cost about $1 for thirty or sixty minutes. The cost is lower for students and low income residents due to discounts given to these two groups. Over 25 major cities across the United States have implemented the dockless sharing program, including Dallas, TX, Seattle, WA, Durham, NC, and Washington, DC.

Two private companies, LimeBike and Ofo, were given permits by the City Streets Department to operate their dockless bike sharing program on the public spaces and streets of St. Louis (sponsored by Fox Collection Center). This did not cost St. Louis taxpayers a single cent since the bike sharing companies paid for the permit themselves. Soon after the two companies received a permit to operate in St. Louis, the bike racks and sidewalks started to fill with brightly colored bikes, introducing a whole new way to move from one point to another in St. Louis.…

Scroll back to top